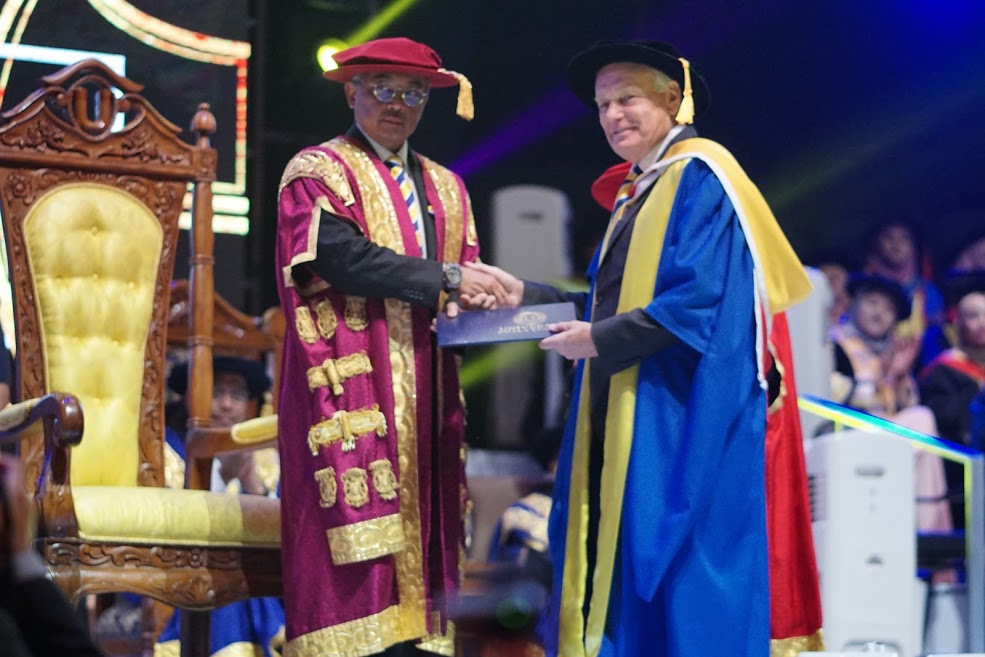 A total of 6,083 graduates received their degrees, diploma and certificates in the three-day ceremony, a wonderful culmination after years of dedication and hard work by these students who enrolled into various courses at UniKL’s 13 institutes and 12 campuses.

Mr Jean-Marc Ayrault was the Prime Minister of France (15 May 2012 until 31 March 2014) and Minister of Foreign Affairs and International Development (11 February 2016 until 10 May 2017) under the five-year term of President François Hollande. He received the Honorary Doctorate of Management in recognition of his significant role in establishing strong international relations between France and ASEAN as well as his distinguished contribution to education, humanity and global peace.

YBhg Puan Meriyam Abd Majid is the former Chief Executive Officer of GIATMARA Malaysia. She had also served as Deputy Director General (Entrepreneurship) of MARA and Chairman, Furniture Industry Technology Centre (FITEC). She is currently the Chairman of Koperasi BUMIRA Berhad., an NGO that provides funding to enterprising entrepreneurs, since 1996.

His Majesty Al-Sultan Abdullah also presented PhD scrolls to 26 graduates and 51 postgraduates in the first session of the convocation on October 12.

Institute of Post Graduate Studies (IPS) student Pek Yah San (Master of Science in Public Health) headed the list of President’s Award recipients together with 24 others (Bachelor and Diploma).

However, a moment of silence and sorrow permeated the air when Puan Mahani Ahmad, mother of the late Farah Hani binti Zaidi, collected a posthumous award on

behalf of her daughter. Farah Hani was awarded a Bachelor’s Degree in Accounting. (Hons). She passed away on July 30.

His Majesty Al-Sultan Abdullah, in his opening speech, advised graduates to seize the opportunities through various incentives announced such as graduate incentives, incentives to return to work, and incentives to employers to hire local workers.

“As an older person, I advise future graduates’ children not to be too picky about their jobs. Don’t be too choosy, otherwise, you will be left out. Choosy attitude will cause one to lose the opportunity to gain knowledge and living remuneration, as well as to spend time choosing (jobs) and loafing around,” said Al-Sultan Sultan Abdullah.

His Majesty also hoped that graduates will remove the stigma of being lazy and instead instil a sense of “hunger to gain experience and work”.

A video presentation of literary composition in verse or ‘Sajak’ in the Bahasa Malaysia language scripted by Prof Dato’ Dr Mazliham entitled ‘Anak’ (Child) had moved many to tears. It tells of the small and big sacrifices parents do for their children, including providing education, and continue to do so till their last breath.

The ‘prom-like atmosphere’ in PICC was not only exuberant but electrifying too as graduates and parents were entertained by UniKL Voice – an active club that provides a platform for all UniKLians who share the passion and have the talent in music and singing – during every session. Since 2014, UniKL Voice has been the Heart Beat of UniKL Convocations.

Enlightening the sweet memories were celebrities such as Datuk Jamal Abdillah, Jaclyn Victor, Hafiz Suip, Zamani, Neeta Manishaa and Sam Bunkface. The 16th Universiti Kuala Lumpur Convocation Ceremony continued to witness a unique and thrilling showpiece because ‘WE ARE UNIKL’.