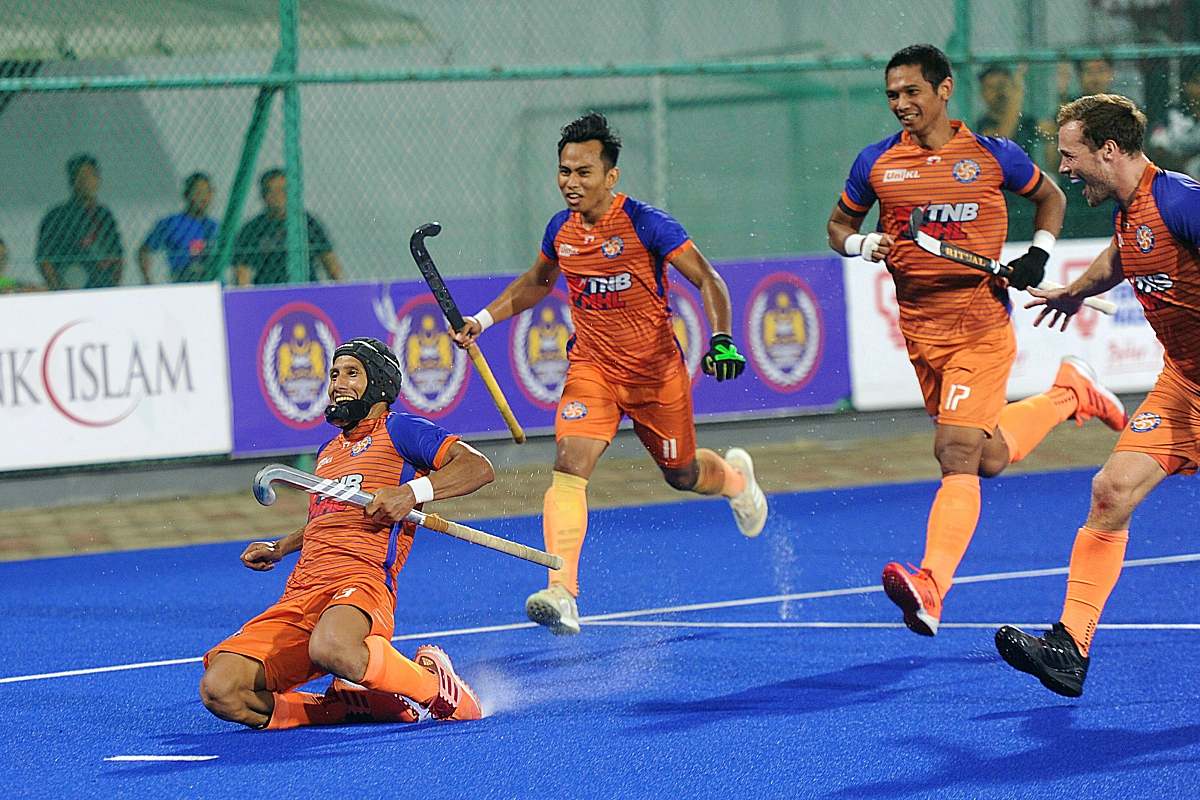 Bukit Jalil (22 February, 2020): Universiti Kuala Lumpur (UniKL) lived dangerously until the fourth quarter before putting the shackles on defending champions Terengganu Hockey Team (THT) for a 2-1 victory in the final of the TNB Cup at the National Hockey Stadium in Bukit Jalil tonight.

In accordance with UniKL’s motto of “Where Knowledge is Applied and Dreams Realised’ the varsity team fulfilled its 2020 mission of a treble having won the Charity Shield and Premier League title.

A teary eyed UniKL coach Arul Selvaraj, said: “All credit goes to the management of UniKL especially President and Chief Executive Officer Prof Dato’ Dr Mazliham Mohd Su’ud and UniKL Hockey President Dato’ Amir Azhar Ibrahim for turning this team into champions. They have done so much and today we are worthy champions.”

“When we were down 1-0 I told the players that they are not doing enough, especially some seniors. I was deciding to take them out but they assured me they will get the goals. This is a great team, disciplined and organised. I am thankful to Tengku Ahmad Tajuddin for running hard throughout the match despite his jaw injury. I am thankful to all my players for making it a great day for UniKL in the final,” added Arul.

Nabil Fiqri Mohd Noor gave THT the lead in the 13th minute from a goalmouth melee after South Korean Jang Jong Hyun’s drive was stopped by a defender off a penalty corner.

THT, however, were reduced to 10 players in the 42nd minute when Jang was sent to the sin bin for rough play, leaving a gap in their penalty corner strike force for a brief moment.

But UniKL, not known for living dangerously before this having scalped all their opponents mercilessly in the Premier League to remain unbeaten, fought back gallantly. Muhammad Faid Farhadh Muhammad Shah restored parity with a field goal in the 48th minute and Tengku Ahmad Tajuddin Tengku Abdul Jalil doubled the score seconds later as UniKL went on to win 2-1 and wrest the title they last won in 2018.

THT had a good chance of equalising in the 59th minute when team captain Fikri Saari went on a solo effort but was stopped by Irishman Harte at the top of the semi-circle.

The TNB Cup has been THT’s romantic playground. They have been the most successful team having won the Cup five times before today’s proceedings.

Drag-flick specialist Muhammad Razie Abdul Rahim’s drive in the first attempt rebounded off the right post. The ball fell near Muhammad Marhan Mohd Jalil but the UniKL captain was not in a striking position.

The second attempt went to waste after Dutchman Roel Bovendeert failed to make a clean stop.