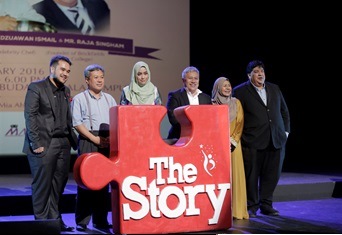 KUALA LUMPUR, 8 Januari 2016 – The crowd rose to their feet by the time the curtains came down on “My Story II”, as three inspirational Malaysians shared their journey on success and failures with the audience at Istana Budaya Kuala Lumpur. Organised by Generasi Bersatu Malaysia (GBM), an organisation established solely for Malaysian youth and to assist young generation for their development, ‘The Story’ is to inspire all Malaysians, particularly the youth, for them to strive and achieve success in the field that they are pursuing.

As a platinum sponsor of ‘The Story II’, around 50 students coming from all campuses of UniKL will be able to join in all sessions under the series of ‘The Story’ carried out throughout the year 2016. UniKL President / CEO, Prof. Dato’ Dr. Mazliham Mohd Su’ud said during the press conference held before the event,” In UniKL, we want to create towering personalities. We want to develop successful entrepreneurs, we do not want to create mere followers but we want to mould leaders in their respective fields. We want to develop job creators rather than job seekers”. 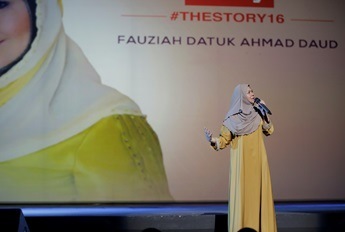 Kak Ogy sharing with the audiences how she was shunned by teachers and school mates as a child for being the daughter of performing artistes. A true artiste who regards her profession very seriously, despite her bubbly character.

Fauziah Datuk Ahmad Daud a.k.a. Kak Ogy
– “Never get disheartened by NO’s. Always remember, when people say NO to you, it means New Opportunity” 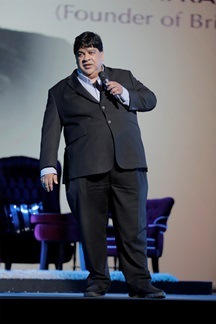 Raja Singham
– “In life, there is nothing to be depressed about. If you face a problem, use our god given brain and work hard to solve the problem. Simple ”

Dato’ Mazliham added, “By collaborating with Generasi Malaysia Bersatu on ‘The Story’ series, I believe there is a lot that we can learn from each other despite coming from different backgrounds. I believe what these young people are doing is admirable, and I believe that there are plenty of positives that UniKL students will gain from this collaboration and exposure. Upon graduating, students of UniKL will be ingrained with FIVE qualities named as UniKL DNA which include Highly knowledgeable, Towering personality, Dynamic leadership, High entrepreneurship values and Always learning and improving oneself”.

The Story series is a storytelling session that gathers Malaysian Superheroes that are globally recognised to deliver their stories to Malaysians. GBM together with UniKL is planning more such sessions in the future which will benefit the audience, youths specifically. It is hoped that more people will join these events in the future and learn something valuable to help them push forward in life. Below are some memorable quotes from the speakers on the day.

Chef Wan sharing his early childhood struggles at the Army Camp and Felda estate as the eldest among 7 siblings. A true Malaysian hero and ambassador of food and culture. 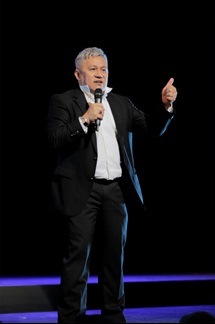 Datuk Redzuawan Ismail, a.k.a. Chef Wan
– “My energy comes from wanting to be the best, wanting to strive for perfection, and because I do what I love”
– “Food is love, food is relationship, food is respect, food is compassion.”